Award Temp of the Quarter

An accounts specialist who made such a success of a temporary assignment that his contract was extended has now scooped an award.

Peter Banks has been named as the latest winner of the Prince Personnel Temp of the Quarter Award, and was chosen by the experts at the recruitment agency who are based in Telford.

He has previously worked in sales and purchase ledger roles, and turned to temping after he was made redundant.

Prince Personnel secured a placement for Peter with a global engineering business in Telford, and he joined their accounts payable department.

The company said he had proved to be an excellent addition to the team - so much so that they decided to extend his assignment.

Alison the Senior Accountant said: "When Peter joined the business, we had just recognised we had a serious problem with our accounts payable system - unreconciled accounts, missed payments and wrongly-allocated accounts.

"Peter took this in his stride and effectively helped our business turn these issues around. He was happy to get stuck in and his professional manner was recognised within the business and by our suppliers.

"His help during this period has been invaluable and I would consider him an asset to any Finance team."

Prince Personnel launched their Temp of the Quarter Award to reward temporary staff who have been particularly successful during their placements, and who deserve special recognition.

Accounts and Finance Specialist Consultant Kerry Tostevin said: "Peter has been extremely flexible and accommodating, and willingly took on his temporary role at short notice.

"He is now gaining invaluable experience and he is consistently pleasant and friendly. It's a pleasure to recognise his outstanding performance and to award him our latest Temp of the Quarter prize."

Award Temp of the Quarter 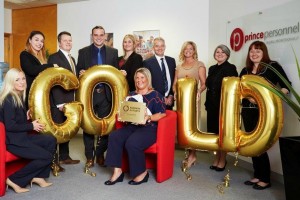 Recruitment experts at a Telford company are celebrating after...
More A Telford woman was so successful in a temporary work placement that...
More 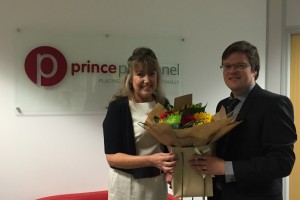 A Shropshire woman who turned to temporary work as a way...
More Flexibility pays off for top candidate

A Telford candidate with a flexible approach to temporary work has...
More