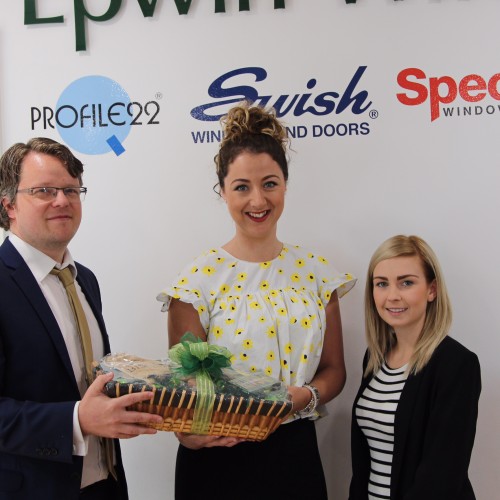 Part-time hours are the perfect fit

A marketing executive who relocated to Shropshire to be nearer her family has been so successful in a temporary role that she's been offered a permanent job.

Katie Allman, from Whitchurch, took maternity leave from her previous employer and decided to relocate from Plymouth, but she was concerned it would be difficult to find the flexible hours she needed in the marketing sector.

So, she turned to Prince Personnel, in Telford, and the recruitment agency set about finding her the perfect placement.

And now, after impressing the management team at the Epwin Group, on Stafford Park, Katie has been named as Prince Personnel's Temp of the Quarter and secured a permanent job.

Maria Sandford, who runs the recruitment agency, said: "Katie had been preparing herself for the possibility of having to accept a non-marketing related role in order to achieve the part-time hours she was looking for.

"But our specialist Steve Wakeley, who looks after our commercial temps' desk, created a candidate profile for her outlining her experience and background, and this attracted the attention of our client Epwin, who were looking for someone to fill a part-time gap in their team."

After a successful interview, Katie started work on a temporary basis, and Epwin's Marketing Manager Gerald Allen was more than impressed.

"Katie has been absolutely brilliant - she has been really flexible and enthusiastic, and has made a real contribution to the business," he said.

Every quarter, Prince Personnel makes an award to the candidate they believe has been outstanding in their placement - someone who has really stood out in a crowd, and excelled in their chosen role.

Maria said: "Katie has been a model temp, communicating with our team over any questions she had about her temporary role, and we're delighted that her hard work and impact at Epwin has been recognised with the reward of a permanent contract offer."

Epwin is one of the UK's largest manufacturers and suppliers of PVC windows, doors, and fascia systems.

As a reward for being named as the latest Temp of the Quarter, Katie will now receive a hamper from the Prince Personnel team.

The Award was created by the agency to recognise the efforts of temporary staff and let them know how much they are valued. Everyone in the Prince Personnel team has the opportunity to nominate any candidate on the agency's books who they feel deserves the title.